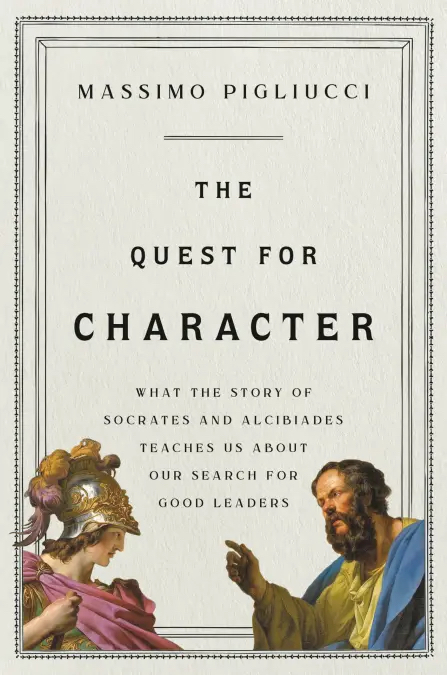 Massimo Pigliucci is the K.D. Irani Professor of Philosophy at the City College of New York. His academic work covers evolutionary biology, philosophy of science, the nature of pseudoscience, and practical philosophy–he’s a true Renaissance man. He deploys his lambent prose as a professor, blogger, podcaster and author. Our short interview with this towering figure is for us a “very good get.”

His books for the general public (lucky us!) include “How to Be a Stoic: Using Ancient Philosophy to Live a Modern Life” and “Nonsense on Stilts: How to Tell Science from Bunk.” His latest and some would say greatest is “The Quest for Character: What the Story of Socrates and Alcibiades Teaches Us about Our Search for Good Leaders.”  Get it now!

Massimo’s home on the web is https://massimopigliucci.org. And don’t forget to subscribe to his Substack at https://figsinwinter.substack.com!

Previous entries in the “Five Questions” series are here.

1. What inspired you to write your latest book, “The Quest for Character”?

The original idea came because of my fascination with the character of Alcibiades, who was a friend and student of Socrates. He was a brilliant man, impossibly handsome, ultra-rich, brave, dashing. He wanted to become a leader in Athens, but his character was deeply flawed.

Socrates tells him to stay away from politics because of that, but Alcibiades ignores his advice. Sure enough, disaster ensues, and Alcibiades eventually is at least partially responsible for the disastrous outcome of the Peloponnesian War, as far as Athens is concerned.

The story made me think about the importance of character in general, especially when it comes to politicians and statesmen. And I also started to think about the relationship between philosophy and politics. So the book eventually became an exploration of the concept of character and how we can improve it, as well as an inquiry into what happens when ethics and politics intersect.

The gist is that we can—and certainly should—work on improving our character. But also that we unfortunately let ourselves be guided by many who have no business being in politics and public service in the first place. And the reason we do that is that we don’t pay enough attention to character.

2. Why do Classical figures and Classical wisdom still resonate with us today?

Great question! The reason is that those people—Socrates, Cicero, the Stoic Epictetus, and others—had very good intuitions about human nature and psychology. And those are two things that haven’t changed much in the intervening millennia.

I mean, our science and technology has certainly improved. It would be ridiculous to look at Aristotle nowadays if you wanted to be a physicist or a biologist. Nor does Roman engineering have much to teach us, regardless of how brilliant it was in its day.

But when it comes to how to live our life, the Greco-Romans are still pretty much unsurpassed. (In the western tradition, of course; there are also eastern and other traditions that are just as valuable.) That’s because we still pretty much want the same things (love, respect, wealth) and are afraid of the same things (sickness, pain, death). The Greco-Romans understood these issues very well and came up with a number of effective strategies to cope with them. It’s not by chance that one of the most effective modern psychotherapies, Cognitive Behavioral Therapy (CBT) is founded on the work of the Stoics.

3. What first drew you to Stoicism?

A midlife crisis, and the conviction that practical philosophy is the best way to deal with life in general. I was going through some standard things, like my father’s death and an unexpected divorce. I was also at the same time studying philosophy professionally, and I figured that philosophy ought to provide help with life issues, otherwise people like Socrates were profoundly mistaken.

I then devoted some time to the exploration of a number of practical philosophies, beginning with Buddhism and continuing with Aristotelianism and Epicureanism. They were all very interesting, but none really clicked with me.

Then I read the early second century Stoic Epictetus and I distinctly heard the click in my head, metaphorically speaking. This guy was talking in a straightforward manner, no nonsense, and not just theory. He was about life as it actually happens, and he knew about adversity. He started out at the bottom of society, as a slave; eventually was freed and started teaching philosophy; but he spoke truth to power and power—in the form of the emperor Domitian—sent him into exile. Whereby Epictetus rebuilt his school and become the most sought after teacher in the entire Mediterranean area.

Plus, his sense of humor is devastating! I learned a lot from him, particularly what he called the fundamental rule of life: some things are up to us, while others are not. And a good life is the result of focusing on the first category and develop an attitude of equanimity toward the second one.

4. At one point you expressed some ambivalence about Stoicism. How would you describe your relationship with Stoicism now?

Stoicism is a philosophy that was developed over two millennia ago. Just like other similar philosophies (Buddhism, for instance) and religions (Christianity), it needs to be updated to the 21st century. Some such updates are rather straightforward, others a bit more delicate.

For instance, the Stoics believed that the universe was a sentient living organism. Modern science doesn’t support that notion, so it needs to be discarded. Unfortunately, however, that sort of metaphysics is directly linked to Stoic ethics, because it is from the existence of a living cosmos that the Stoics get their concept of Providence. If the former goes, so does the latter.

Perhaps more importantly, Stoicism never has been interested in structural political change. For a Stoic any political system we happen to live under is “indifferent,” not in the sense that we don’t care, but in the specific sense that it makes no difference to the most important thing of them all: our character. This is true, but we still need to work on changing systems that are not conducive to human flourishing, like autocratic ones, for instance.

So these days I take inspiration from the Roman advocate, statesman, and philosopher Marcus Tullius Cicero. He appreciated Stoicism and took a lot from it, but considered himself a Skeptic, that is someone who is free to change his mind if new arguments or facts come to light that demand new attitudes and strategies for living. Interestingly, he said of his friend Cato the Younger, a stern Stoic:

“As for our friend Cato, you do not love him more than I do: but after all, with the very best intentions and the most absolute honesty, he sometimes does harm to the Republic. He speaks and votes as though he were in the Republic of Plato, not in the scum of Romulus.”

Indeed, we live in the scum of Romulus, not in an ideal utopia. And we need to act accordingly.

5. When was the last time you screamed your lungs out for any reason?

Many, many years ago. And I’d like to keep it that way. A lot of people have this bizarre notion that it is dangerous to keep one’s emotions “bottled up” and that we need to vent them out from time to time. Nonsense. There is no empirical evidence for this Freudian “hydraulic” theory of emotions. In fact, Freudianism is nowadays considered a pseudoscience.

That said, if you feel like screaming your lungs out and it makes you feel better, by all means do it. But it makes me feel stupid, so I’d rather reason with other people and with myself and arrive at a calm resolution of issues.

Bonus question: What should we have asked you, and what’s the answer?

Oh, so many possibilities! But of course we all have limited time. Perhaps this: “What’s your next project?” The answer is: a book on Skepticism using Cicero as my guide. The idea is to explore fundamental issues in life, from friendship and politics to aging and death, on the basis of the best combination of science and philosophy that is available to us.

You know, as in using reason and evidence instead of wishful thinking to tackle our problems. The idea has been around for two and a half millennia, but so many of us haven’t quite mastered it yet!

Stay in the Know

Be the first to hear when Karen Duffy has new stuff going on - whether it be new blog posts, special appearances, cool merch dropping or donkey news updates!